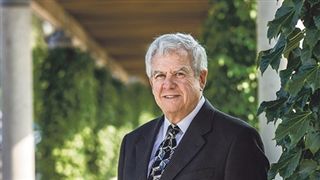 Visionary business leader Thomas A. McDonnell ’62, was selected by the Rockhurst High School National Alumni Association’s Board of Governors as the “Alumnus of the Year” for 2017. McDonnell received the honor during the school’s Homecoming Mass on Oct 4.

“Tom McDonnell is a shining example of what can be achieved living by Jesuit ideals,” said Joshua H. Brewster ’99, President of the Alumni Board.  “He has been a strong, determined voice in advocating business development for Kansas City and cares for worthwhile charitable causes, including Rockhurst High School.  He is an extraordinary ‘man for others.’”

McDonnell is nationally-recognized as a remarkable entrepreneur, businessman, philanthropist and civic leader.  His lasting contributions as a champion of Kansas City have resulted in sustained economic and cultural growth for the area.

“This is an excellent choice for our highest alumni recognition,” commented Rev. Terrence A. Baum, SJ, former President of Rockhurst High School, who headed the school at the time of McDonnell's selection.  “I have known and respected Tom during my entire service to Rockhurst High School and have respected his counsel every step of the way.”

During his professional career, McDonnell was hailed as a futurist in the data services industry.  He was an executive at DST Systems, Inc. from 1969 to 2009, leading the company through explosive expansion and revolutionary information systems.  After retiring from DST, he shifted his talents to the charitable sector as President and Chief Executive Officer of Ewing Marion Kauffman Foundation.  The Foundation had assets that grew to more than $2 billion under his management.

Among the countless honors McDonnell has received are the Kansas Citian of the Year and the William Jewell College Yates Medallion for Distinguished Civic Service. McDonnell has a BSBA in Accounting from Rockhurst College and an M.B.A. in Finance from the Pennsylvania's Wharton School of Business.  He also holds Honorary Doctorate of Law from Pepperdine University George L Graziadio School of Business and Management.

McDonnell and his wife, Jean, have three daughters.  Their grandson, Ryan D. Fielder, is a member of the Class of 2014.

The Alumnus of the Year Award is named for Very Rev. Pedro Arrupe, SJ, Superior General of the Society of Jesus from 1965 to 1983.  Fr. Arrupe coined the phrase “men for others,” as a challenge to alumni of Jesuit institutions to change the world with devotion and service to mankind.  The Award provides a role model for students to give them an example of the type of man the school and Alumni Association hope they will aspire to become.

- Joshua H. Brewster ’99,
President of the Alumni Board