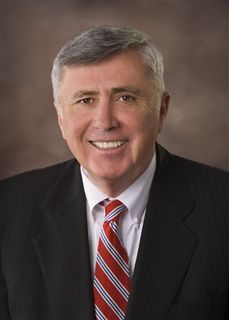 The Rockhurst High School National Alumni Association has chosen Mr. John G. Houlehan, class of 1960, as the institution’s “Alumnus of the Year” for 2014.  Mr. Houlehan will receive the award during the annual Homecoming Memorial Prayer Service on October 1.

“I am deeply honored and humbled to be chosen as Rockhurst High School’s Alumnus of the Year,” said Mr. Houlehan.  “The school’s motto, Sapientia in Christo (Wisdom in Christ) has been deeply ingrained within my family.”

A mainstay of the Kansas City banking community for more than 50 years, Mr. Houlehan began his career with legendary banker Mr. John J. Sullivan, Jr. ’35, in 1961, working as a teller at Roeland Park State Bank, which later became MidAmerican Bank & Trust.  He steadily moved up the corporate ladder to become president in 1983, when the organization was known as MidAmerican Bank.  During his decade of leadership the institution’s asset base expanded from $100 million to $320 million.  Mr. Houlehan stayed with Mercantile Bank as executive vice president when it acquired MidAmerican Bank in 1993, and then First Star Bank in 1999, which was later named US Bank.

Mr. Houlehan has been Country Club Bank’s executive vice president since 2008, developing one of the most trusted asset management programs for high-net wealth clients in the Midwest, as well as $86 million in other bank products, such as deposits and loans.

“My parents were immigrants from Ireland with little formal education,” Mr. Houlehan continued.  “They were insistent their three sons be educated by the Jesuits - first at St Francis Xavier Parish and then at Rockhurst High School.  From this wealth of education, I have learned that life’s priorities must remain my faith, family, friends, work, and community.  It is a most sincere wish that my children, three of whom also graduated from Rockhurst High School, will maintain these loyalties in their own lives.”

Charities throughout Middle America, particularly Catholic causes, have benefited from Mr. Houlehan’s generosity.  He has served in volunteer positions for Rockhurst High School, Bishop Miege, Notre Dame de Sion, and Rockhurst University, as well as been a close confidant for bishops in both the Diocese of Kansas City-St. Joseph and Archdiocese of Kansas City in Kansas.  Mr. Houlehan has been co-trustee with Mr. Mark J. Henke ’72 of the John J. Sullivan, Jr. Foundation since it was established in 1997.  The Foundation has awarded more than $6 million in grants to charities since Mr. Sullivan’s death in 1999.

The Alumnus of the Year award is given to the graduate who honors the spirit, mission and vision of the Society of Jesus with continuing service to Rockhurst High School and the community by making significant contributions of time, talent and treasure.  The award is dedicated to the Very Reverend Pedro Arrupe, SJ, who served as Superior General of the Society of Jesus from 1965 to 1981 and coined the phrase “men for others.”

Nominations for Alumnus of the Year candidates are accepted from the general public.  Candidates are vetted through the National Alumni Association Board of Governors for final blessing by Rockhurst High School’s president, Rev. Terrence A. Baum, SJ.