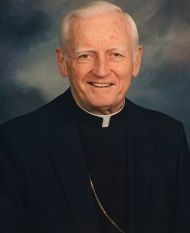 The Most Reverend George Fitzsimons, class of ’45, has been selected by the Rockhurst High School National Alumni Association Board of Governors as the school’s 2011 Alumnus of the Year. He will receive the award during the Alumni Senior Luncheon on May 6.

Fitzsimons is bishop emeritus of the Salina, KS diocese, where he served until his retirement at 75 years of age in 2004. Even in retirement, he continues to care for St. Patrick’s Parish in Ogden, KS and assists at Seven Dolors Parish in nearby Manhattan, KS.
He was born in 1928 in Kansas City, MO, the son of George and Margaret Mary (Donovan) Fitzsimons. He attended St. Francis Xavier Grade School, Rockhurst High School and Rockhurst College. Before entering Conception Seminary in 1956, he served as a U.S. Navy pilot from 1950-54 and sold real estate for two years.

Ordained a priest in 1961, Fitzsimons served the next 14 years as an associate pastor, pastor, high school teacher and college chaplain. He is well known for his contributions at the Cathedral of the Immaculate Conception, St. James Parish, Our Lady of Good Counsel Parish, Christ the King Parish, William Jewell College, St. Pius X High School, Loretto Academy, Lillis High School, Avila College, Kansas City Junior College, the Serra Club and the Southern Curia of the Legions of Mary.