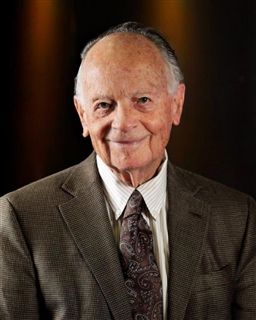 William H. Dunn, Sr. has worn many hats since graduating from Rockhurst High School in 1940:  husband, father, grandfather, great-grandfather, construction expert, Navy veteran, philanthropist, and the list goes on.  Even at the age of 91 years old, and ready to celebrate his 75th graduation anniversary from The Rock, Mr. Dunn maintains his famous energy for life.

Mr. Dunn has been named the Rockhurst High School National Alumni Association’s Very Rev. Pedro Arrupe, SJ “Alumnus of the Year” for 2015.  The honor will be presented during the school’s annual Homecoming Prayer Service on October 7, 2015, at an all-school assembly.

“I am flattered to receive this honor as a member of the Class of 1940,” said Mr. Dunn.  “Countless individuals in that class were part of the US military for World War II.  I personally feel that we all were beneficiaries of an excellent education that contained discipline, religious training, and the incentive to strive to further our education and training for life.  The motto at every graduation emphasized that we had the means to make a living and a sound philosophy on how to be true to our values in all aspects of life.”

The Alumnus of the Year Award is named for the Very Rev. Pedro Arrupe, SJ, Superior General of the Society of Jesus from 1965 to 1983.  Fr. Arrupe coined the phrase “men for others,” as a challenge to alumni of Jesuit institutions to change the world with devotion and service to mankind.  The Award provides a role model for students to give them an example of the type of man the school and Alumni Association hope they will aspire to become during their lives.

“The Alumnus of the Year designation is the highest honor awarded to a distinguished graduate of Rockhurst High School,” said Joshua H. Brewster ’99, President of the Alumni Association Board of Governors.  “Mr. Dunn is an inspiration to our community.  He never stops giving, and living, as a true ‘man for others’ for the greater glory of God.”

The President of Rockhurst High School, Rev. Terrence A. Baum, SJ, agreed with the sentiments offered by Mr. Brewster.

“I was honored to approve and bless the recommendation made by the Alumni Board,” commented Fr. Baum.  “There are times when a person embodies everything we would expect our students to become in life.  Bill Dunn is that kind of man.”

When looking for a perfect success story in business, philanthropic achievement, and most importantly, family, Mr. Dunn’s is ideal.  He is Chairman Emeritis of JE Dunn Construction, where he has served for 68 years.  JE Dunn is one of the leading providers of construction management services, design-build, and integrated project delivery in the United States.  His charitable work has literally helped millions of people in education, social services, youth organizations, and the Catholic Church.  JE Dunn was the general contractor for building of the Greenlease Memorial campus, which opened in 1962.

Mr. Dunn and his wife, Jean, have five living children, as well as three who have passed away; 20 grandchildren; and 29 great-grandchildren.  Their son, Stephen, graduated from Rockhurst High School in 1970.  Grandsons Jeffrey ’95, Timothy ’96, and Joseph ’04, are also alumni.