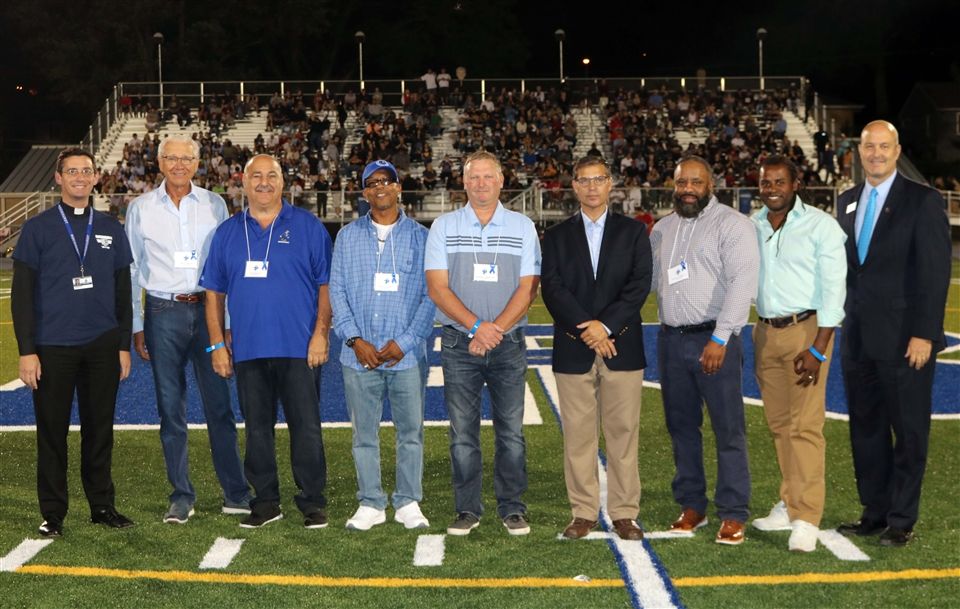 9/16/2019
Seven Rockhurst High School alumni were inducted to the school’s Sports Hall of Fame on Sept. 13 during Alumni Reunion Weekend.
The 2019 honorees are: John Kafka '68, Carl Tutorino '74, Merle Gardner '87, Chris Holmes '89, Bert Roney '91, Thomas "Tay" Officer '95 and Jason Cole '99.
The Hall of Fame honors alumni, coaches and friends who have had a major impact on the school’s athletic tradition. Given Rockhurst’s storied heritage of sporting excellence in the Midwest, selection to the Sports Hall of Fame means recognition among the “best of the best” in Midwestern athletic history.
Currently, there are 107 alumni, 11 coaches and three friends of the program who have been inducted as members.
Honorees are determined by a Selection Committee that reviews nominations by Alumni Class Captains, as well as recommendations from the public at large, before submitting a slate to the Rockhurst President for his approval.  Here is a bit about each of the 2019 inductees:

John Kafka '68 was a pure scorer on the basketball court.  As a senior, John earned himself the reputation as a top player in the city and state.  He averaged more than 21 points per game while leading the Hawklets to a 20-5 record in the 1967-68 season.  He shot 54% from the field and 78% from the free throw line. John dropped 42 points in one game - and this was prior to the three-point line!  During that senior campaign, John led the Hawklets on a 19-game win streak and was eventually named 1st Team All-State for his efforts.  John would go on to play basketball at Regis College (now University).

Carl Tutorino '74 was an interior force on both sides of the football for the Hawklets in the early-70s.  He is most known for his role on the 1973 team that finished as the State Runner-Up with a 10-2 record. Rockhurst frustrated opponents with a punishing defense that allowed just 8.4 points per game, and paired it with a run-heavy offense that controlled the game.  Carl, from his tackle position, fostered the team’s success.  He was named to the All-Metro, District and State Teams, named a Prep All-American and was selected as the winner of the Dr. D.M. Nigro Award (now called the Simone Award), given to the most outstanding player in the Greater KC Metro area.  Carl went on to play football and baseball at Northwest Missouri State.

Merle Gardner '87 is still revered as one of the best all-around athletes in Rockhurst history.  Whether it was on the football field or around the track, Merle was going to outrun you. Merle was a three-year starter out of the backfield who led Rockhurst in scoring as a sophomore and junior.  And the tandem he formed with Kenyon Rasheed in 1985 and 1986 was one of the most lethal backfields the state has ever seen. The duo led Rockhurst to the 1986 State Championship.  Merle was just as impressive on the track.  He was a rare four-year letterman and a three-time State qualifier as a sprinter.  And Merle could not even play perhaps his best sport for the Hawklets: baseball. Rockhurst did not have a baseball program at the time, but he was drafted by the Royals in 1987.

Chris Holmes '89 was a do-it-all athlete at The Rock.  In the fall, Chris stood out on the gridiron as a special teams player before taking over as the Hawklets’ leading receiver as a senior.  Chris was part of the 1987 State Championship team and then in 1988 earned himself All-Metro and 2nd Team All-State honors from his wideout position. In his two seasons as a starter, Rockhurst went 22-2-1.  Chris lettered in basketball as a junior before narrowing his focus to football and track.  You can still find Chris’ name on the track record board today as a member of the 1988 State Champion 4x400 relay team, which ran a blazing time of 3:16. Between his junior and senior track seasons, Chris qualified for State in seven events.  He would go on to play football at Southwest Missouri State (now Missouri State).
Bert Roney '91 is the only golfer in school history to earn All-State honors each of his four years on the golf team.  Bert made his presence felt on the local and state circuit beginning his freshman year when he was the District Champion and the only Hawklet to medal at State, placing 12th individually.  Sophomore season was Bert’s first of three top-10 finishes at State.  As a junior, Bert averaged a team-best 36 shots per nine holes and tied for 8th at the State tournament.  Then, as the senior captain, Bert led the Hawklets to a Team State Championship in 1991, the fourth in program history.  His Rockhurst career culminated in a 5th place individual finish. Bert went on to golf at Northwestern University.

Tay Officer '94 was a two-sport superstar at The Rock. As just a sophomore, Tay was significantly contributing to both the varsity football and basketball teams. As a junior, Tay was a two-way starter for Coach Severino’s Hawklets while leading the team in receiving.  He earned All-District and All-Metro Honors.  Tay took it to another level on the hardwood.  As a junior, Tay was an All-District and All-Metro selection.  From the point guard position, Tay then averaged 17 points and 6 assists per game his senior season, including a school-record 46 point performance against Creighton Prep.  Helping lead one of the most prolific offenses in school history, Rockhurst regularly scored in the 80s, 90s and 100s. Tay earned All-State status and was a McDonald’s All-American nominee. He would go on to play basketball at the University of North Texas.
Jason Cole '99 was instrumental in Rockhurst Soccer winning its first State Title in 1998 and helping build the program into the powerhouse it is today. Jason played his way onto the varsity squad as a freshman and began his consistent goal scoring over his four seasons.  Following three successful underclassman seasons, Jason was named co-captain his senior year.  Leading the team in scoring with 30 goals, Jason guided the Soccer Hawklets to their first ever State Title, going 27-0-1 on the season; still the only undefeated team in program history. Jason scored the game-winning goal in the 1998 State Championship game against Chaminade and was named All-State and the Metro Player of the Year.  He would go on to play at SLU and was drafted to the MLS by the Colorado Rapids.
Back