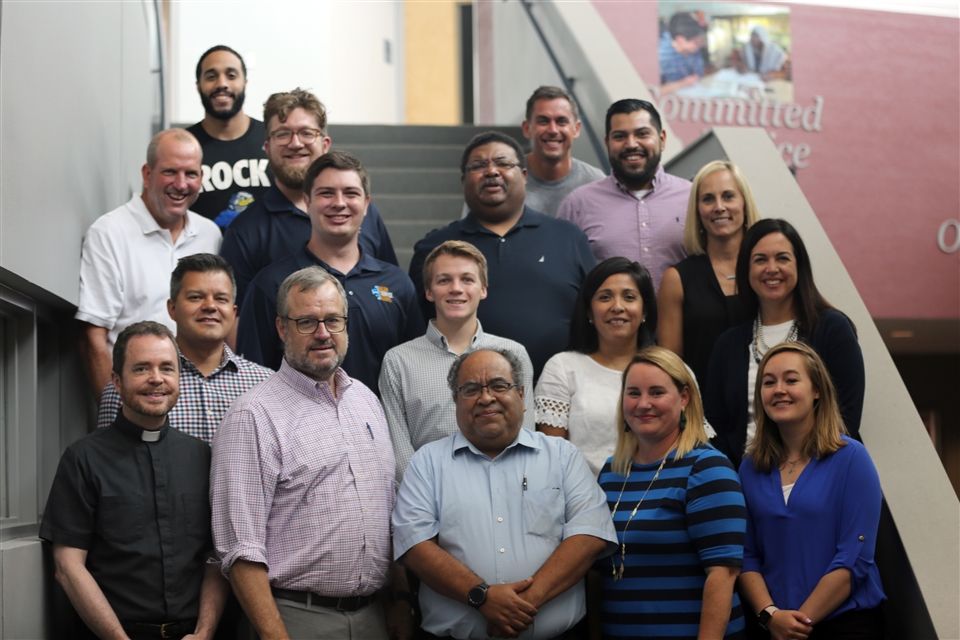 Mr. CJ Armenta comes to Rockhurst after a long career in the Blue Valley School District.  He holds a BS from Rockhurst College (now University), an MA in Education from UMKC, and an MS from Emporia State University.  CJ will be joining the Mathematics Department and helping the Chess and Math Clubs.

Mr. Dan Calderon is a member of the RHS Class of 1999.  He holds a BA from Marquette University and a JD from the University of Kansas.  After a career of practicing law, Dan is transitioning to teaching by joining the English Department and will coach soccer.

Mr. Jeff Crowe is a familiar face at The Rock.  He is a member of the Class of 1986 and has contributed as a teacher and/or coach at Rockhurst for the last 20 years.  He holds a BSBA in Finance and Economics from the University of Missouri and has worked in finance, trading futures, and options, for 29 years.  Jeff will be joining the Social Studies Department in the area of Economics.

Mrs. Heidi Delaney joins the Rockhurst faculty full time after working here during the fall semester of 2018 as a medical leave replacement.  Heidi holds a BS from Kansas State University and an MA from Baker University.  Heidi will bring her several years of educational experience to our community as she officially joins our Science Department.

Mr. Mike Day returns to his alma mater.  He is a 2001 graduate of The Rock and was a teacher and coach here from 2008-2018 before spending one year at Brophy College Prep in Phoenix.  He holds a BSBA and an MBA from Rockhurst University.  Mike will be re-joining the Mathematics Department and returning as a football, basketball and track coach.

Mr. Leo Hirner comes to Rockhurst after many years in higher education, most recently in Oregon.  He holds a BS and an MS from UMKC and a PhD from the University of Missouri–Columbia.  Leo is also the parent of a RHS alum, Nick, from the class of 2015. Leo will be joining the Science Department.

Mrs. Beth Jerome transitions from Holy Cross Catholic School, Kansas City, MO, where she was the Assistant Principal.  She is a 2002 graduate of St. Teresa's Academy, and went on to receive a BA in Art & Media Studies from DePaul University and an MA in Education from Avila University.  Beth will be our new Assistant Director of Admissions & Marketing.

Rev. Gary Menard, SJ, returns to Rockhurst where he was once Pastoral Director and an instructor in Mathematics.  He holds degrees in the areas of Mathematical Computer Science, Psychology, Scientific Russian Translation, Divinity, and Private School Administration.  After joining the Jesuits in 1988, he has taught high school at Regis Jesuit (Denver), Rockhurst and Arrupe Jesuit (Denver), where he was Assistant Principal for eleven years.  Most recently, Gary served as the Dean of Academics for Student Support at Cristo Rey Jesuit College Prep in Houston. He joins our Math Department and will assist with the Hurtado Scholars Program.

Mr. Carlos Muñoz is welcomed back to the Midwest after a year of service with Teach for America and five years of teaching at Strake Jesuit, both in Houston.  Carlos holds a BA from the University of Kansas. He will be joining the Modern and Classical Languages Department.

Mr. Zach Nelson served as a leave replacement sub for the majority of the 2018-19 school year.  He returns this year as a full-time member of the faculty. He holds a BS from Westminster College.   Zach will be joining the Mathematics Department and will coach basketball.

Mr. Allen Roberson joins Rockhurst as our Chief Financial Officer.  He is coming to Rockhurst after his role as Vice President of Finance and Administration for Sekisui Xenotech, LLC.  His career has included various Chief Financial Officer roles for companies like Planet BioPharmaceuticals, Inc. and, Cydex Pharmaceuticals, Inc.  Allen is also a former RHS Board of Trustees Chairman and Member of many years, and a former Special Assistant to the President of Rockhurst (2016-17).

Mrs. Vanessa Wiegman comes to Rockhurst after many years in education, most recently at Bishop Miege High School.  She holds a BA from Rockhurst College (now University) and an MA from Rockhurst University.  Vanessa will be joining the Modern and Classical Languages Department.

The following are the ASC members for the 2019-20 school year:

Mr. Jim Gasch is a graduate of St. Louis University High School and holds a BA from the University of Alabama.  In addition to assisting the school in a variety of activities, Jim will be teaching in the Social Studies Department.

Mr. Conor LoPiccolo is a graduate of De Smet Jesuit High School and holds a BA from Saint Louis University.  In addition to his responsibilities as an ASC member, Conor will be teaching in the Theology Department.

Mr. Eric Lovan is a graduate of De Smet Jesuit High School and holds a BS from Saint Louis University.  While assisting many Rockhurst programs, he will be teaching in the Science Department.

Ms. Liz Stevinson is a graduate of Regis Jesuit High School in Denver and holds a BA from Creighton University.  She will be assisting many Rockhurst co-curricular programs, and she will be teaching in the Theology Department.  Liz is a trailblazer as she is the first female member of the ASC program at Rockhurst.
Back